What makes a great band sound like a great band? Sure, you need a great band, but you need to make sure their sound translates well to the congregation. The key to achieving a great, full-band sound that sounds great to the congregation is a gifted audio engineer. The same is true for achieving great keys sounds in your worship service. There’s no patch bundle or keyboard you can buy that will improve your sound if your relationship and communication with your audio engineer aren’t great.

Without the proper communication, you can end up frustrating each other because you don’t have enough channels, because you have too many channels, or because your sounds are always inconsistent from song to song. In order to create a great keys sound for worship, begin with a great relationship with your audio engineer. Here are a few points to discuss and implement that will result in better keyboard sounds to the house.

Oh, the great audio debate — what’s better, a stereo system or a mono system? While we won’t go into that debate in this article, there are implications for keyboardists that we should discuss here. Why does stereo matter so much to keyboardists, and how does that impact the sound at Front of House (FOH) or for in-ears? Let’s start at the source — the keys sound.

Stereo is an important thing for keyboard sounds. With sample-based plug-ins, lots of work goes into meticulously recording the source and editing the sample to give you a realistic sound and a great playing experience, especially with pianos. Oftentimes, when playing back those samples with a nice pair of headphones or studio monitors, you’ll notice how the sounds are distributed in the stereo field. The left side of the piano has an incredible bass response and is heard primarily in the left output. The right side of the piano has incredible clarity in the high end and is primarily heard in the right output. This makes it very realistic to play these samples, which makes for a great experience as a player.

Now, in the context of live sound, let’s consider what happens when you’re using a mono PA. This means we don’t have the ability to pan left or right, and we have the same sounds duplicated across both speakers (or sets of speakers). As you set up and get ready to plug in your keyboard, you realize there is only one direct box. Where do you connect the cable? If you connect to only one output of your keyboard, you’re going to lose some of your sound.

If you don’t change anything in your DAW or on your keyboard, you won’t be delivering the whole sound. You’ll end up with only the left side of the piano, which will be very low-end heavy, or the right side of the piano, which will have plenty of high end but lack the power of the left hand. Often, in this scenario, you’ll feel like something isn’t right. Something doesn’t sound great, but you can’t pinpoint what it is. 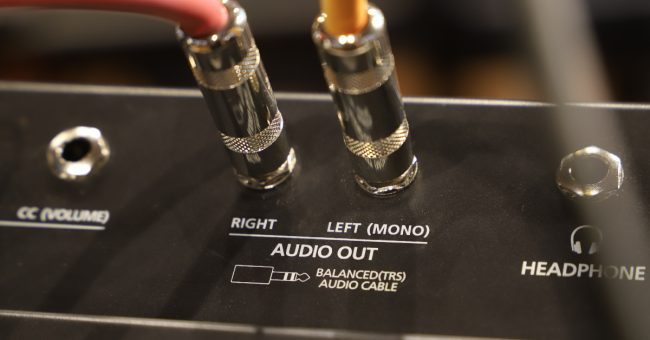 Let’s talk about two approaches to solving this dilemma: one from the FOH perspective and the other from the keyboardist’s perspective.

If you have enough inputs available at FOH, you can use an additional direct box so you can get “the whole picture.” Even if your system is in mono and you’re not going to pan the left side to the left or the right side to the right, you’ll still be able to capture all of the keys sounds. If your in-ear system is set up to be a stereo system (it should be), then you can take advantage of the stereo inputs and panning there.

But what if you’re in a situation where channel count is restricted, and it’s just not possible to add another input? In this case, the keyboardist will have to make a few edits in their DAW or on their keyboard. The easiest way to navigate this issue is to plug into the mono output (typically the left), which will offer a “summed” (combined) output of the left and right channels.

Otherwise, you’re going to want to make sure you’re “summing” your audio at the keyboard output. This will make sure all the audio your plug-in is generating gets sent to a mono output. While there are different ways to do this across various DAWs, in Ableton Live it’s as simple as changing where your track audio is routed. 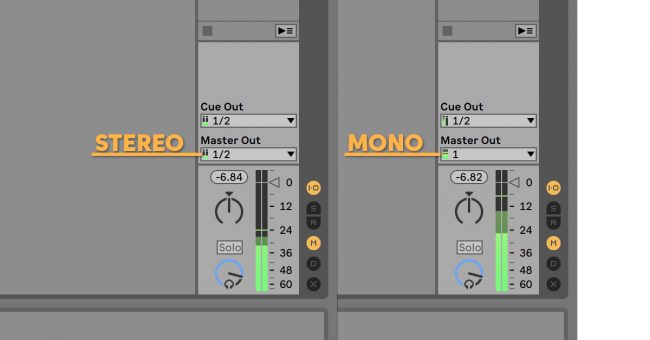 Alternatively, if I only select “1” in my master track, then it’s combining sounds both from the left and the right outputs of Ableton and sending them out of a single output. Now, if I connect a cable to output 1 of my interface, I can hear the full spectrum of sound my keys patch presents.

When possible, use at least two DIs and run your keys in stereo, even in a mono system. But if you can’t, then make sure you change the output routing in your DAW or on your keyboard first.

You just got to the bridge of the song. The band has dropped out and it’s just pad. The sound engineer boosts the keys input to fill the room with the gorgeous ambient pad you’ve created. Then, halfway through the bridge, you add your piano sound, and suddenly your piano is screaming loud through the speakers! If you’ve got at least four available inputs on your audio console, then you can easily solve this problem.

With at least four available inputs, I can split my keys sounds into separate outputs. For this example, let’s split Piano/Keys out of outputs 1 and 2 and my Pad/Synth out of outputs 3 and 4. 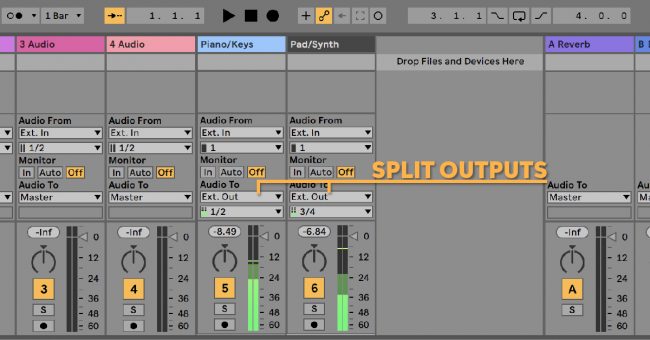 With my keys sounds split between separate outputs, I’ve now given the audio engineer more control and the ability to shape the sound at the mixing console. You can EQ the pads differently from the piano sound. You can pan the piano differently from the pads (if you’re in a stereo system). Best of all, when you need more pads in a low moment of a song or need to tuck piano behind the lead guitar line, you can easily adjust those instruments separately.

You can even take this approach further if you’re using more synth-based instruments like a sub-bass or lots of rhythmic synths. You can split your sub-bass output to a single mono output and EQ it especially like a bass or send more of it to the subs if your console is configured that way. You can get more control over your synth parts and push them more up front during intros and tuck them further back in the mix as the song progresses.

While this approach can provide much more freedom at FOH, it can be disastrous if your communication level isn’t high with your FOH engineer. I’ve been in services where the keyboardist was playing a pad sound when the audio engineer expected to hear piano. What did that mean in the moment? Silence — because the faders were down on the pad channels. Through the musicians’ in-ears, the band heard pad, but in the house, we heard nothing but vocal.

In order to prevent this, you don’t need to institute a policy or check up on your audio engineer, you only need to have a conversation with them on the sound you’re hoping to create. Maybe you mention that you’ll almost always have pad going, and then you’ll layer piano/keys on top. Before the service, in your production run-through, you can even mention that you’ll start this song with pad and add piano later. Those notes and cues never hurt or offend anyone.

This does drive home the point that the band “sounding great” doesn’t just take the band. It also takes the audio engineer, so you should all get on the same page!

If you are not careful, your keys patches can easily lose their effectiveness with drastic volume and tone changes between songs. One song it’s piano, on the next song it’s a sidechained pad. It’s pretty hard to land on EQ settings that make both sound amazing, so how do we work to keep our sounds consistent?

One simple approach is to limit the scope of sounds you’ll use live. My friend and former bandmate, David McKinney, used to always say “You need a great piano sound, Rhodes sound, and pad sound, and you’re all set.” Based on your style of music, you could add much more, but you might even be able to get away with just a great pad and piano sound — it might be enough.

You could also limit your sounds by choosing only a few that you recycle across Sundays. You might use the same, consistent pad and piano sounds week after week, and occasionally play a mono synth lead line when you need it.

Regardless of how many sounds you’re using, spend time beforehand leveling volumes and EQ so they are as consistent as you can get them. Show up 10–15 minutes early to soundcheck/rehearsal and run through your sounds with the FOH engineer. Trust their opinion when they say, “That sound is too bright,” or “The piano is too muddy.” Work together with them to either adjust the settings in your DAW or on the console. Again, this might be a good reason to split your sounds to various outputs, so you can use different EQ for each sound. But, again, make sure you’ve communicated when you’ll use which sound.

In order to achieve great keys sounds, it will take more than a plug-in or a new synthesizer. As a keyboardist, you’ll need to chat with your audio engineer to find a solution that works for you and improves the sound at FOH. As an audio engineer, you’ll need to work with your keys players to find something that works for them in their in-ears but still gives you the consistency and flexibility you need at the console. Use this article as a starting place for the conversation and watch how quickly your sound improves.

The post How to Have your Keys Patches Translate Well via Front of House appeared first on inSync.